My father, William Alexander McCain came to Blanchard, Dakota Territory in the spring of 1887. He bought the Aurora farm near Blanchard in 1891 from his brother. William McCain was born on the McCain Plantation “Teoc” in Carrolton, Mississippi, Oct. 14, 1862 to William Alexander and Louisa. McAllister McCain. His forbears came from Scotland before the Revolutionary War of the Colonies and fought in the War. My mother, Martha Deborah Sutton, was born in Indiana Feb. 14, 1878, to Aaron Franklin and Anne Moore Sutton. The Suttons came from England in 1638 where they had held land grant from the King since the 11th century. They too fought in the Revolutionary War. Grandfather Sutton filed on land in Dickey County in 1882. He was agent for the G.N. Railway and was moved from Riverdale to Blanchard in 1892. It was in Blanchard that my father, William, and mother, Martha, met and were married Jan. 31, 1892. My 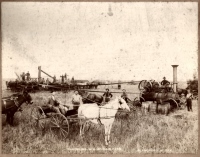 grandfather bought a farm in 1900 near the Aurora farm. Five children were born to Wm. and Martha: Wm. Alexander III, Anne Louise, Dorothy who lived only 13 months, John Pinckney, named for his uncle, Gen. Henry Pinckney McCain, and Franklin Sutton. I, Anne Louise, was named for my two grandmothers. Several of the McCain men were in military service. Camp McCain in Mississippi was named for General McCain. McCain Field was named for the late Admiral John Sydney McCain. His son, Admiral John Sidney McCain and grand-son, Commander John Sidney McCain both served their country.

After my father’s death in 1908, mother moved to Hillsboro where she built a house across from St. Rose of Lima Church. She and the family, Presbyterians, joined the Congregational Church when the old Presbyterian Church closed.

Later, mother married again and we have a sister, Margaret Simpson Courtney, and a brother, Merlin Simpson. Margaret S. Courtney’s husband, Ward, is an Episcopal priest in Washington, D.C. Margaret is manager of the book publishing department of U.S. News and World Report. They have two grown daughters. Merlin is the owner and manager of farm supply stores in Nebraska. He and his wife, Rachel Wise Simpson, have two daughters and a son. Wm. A. McCain III attended NDAC, served in the Navy during World War I, married Doris Kringlie of Portland, and moved to California. They have three children, Wm. A. IV, Doris Ann and Martha. Wm. III died in 1932. John P. McCain married Dorothy Brewster Dunlap of Hillsboro. John was a registered pharmacist from the U. of Wisconsin. Dorothy was a UND graduate and taught school for several years. They had two sons and a daughter, John P. Jr., Caroline, deceased, and Cameron Sutton. They all live in Wisconsin. Franklin S. married Frances Murphy from Arkansas. They have a son, David Sutton McCain. Franklin died in 1974. I, Anne Louise, after attending UND, married Leif Ivar Christianson, -Mar. 11, 1922. We lived in Hillsboro until 1936 where Leif worked in the office of Valley Lumber Co. and taught instrumental music at the Hillsboro School for 14 years. He also directed the Civic Band and church choirs. After he received his B.M. degree from Concordia, the family moved to Moorhead, Minn. where Leif taught music in the Moorhead School System. In 1949 he became associate professor and later, full professor, of music at Concordia College. He earned his M.A. in 1951. The Christiansons have two sons, Wm. Curtis 1923, and John Frederick, 1924. Wm. is a retired colonel of the USAF and lives in Alexandria, Va. John is a retired physician in Phoenix, Arizona. The Christiansons still reside in Moorhead, Minn.