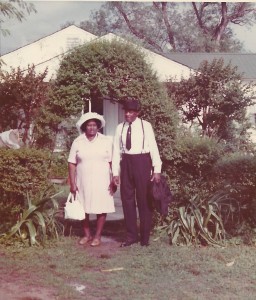 Everything that gave meaning to our lives started in the house. The house was an incubator where we were loved, disciplined and reared.  Infused with love, Mama and Daddy embraced “mother wit” to effectively parent George, Charles, Delbra, Lillie, Joyce and Mary Lou from infancy to adulthood.

White-slate shingles enveloped each side of the bungalow style house that was festooned with a green roof.  The style of the house gave it character and set it apart from shotgun houses that were so typical at that time.  A wood-burning heater in the living room and a wood-burning stove in the kitchen provided heat throughout the three bedroom house.  Separated by a small 6’X 2’ space that was later converted into an indoor bathroom, the girls’ bedroom was adjacent to our parent’s bedroom; and the boys slept in the backroom.  The beds were decked with ticks that were filled with cotton.  After a night of sleep, the routine was to “make your bed” by scrupulously stirring and shaking the loose cotton; repositioning the cotton and patting the cotton until it was formed and leveled, giving the bed the appearance of having a mattress.  A handmade quilt and a blanket for each bed distinguish the winter months from the summer months, when the beds were garnished with two white sheets and a decorative spread.

As summer gave way to fall each year, quart jars of string beans, purple hull peas, pickled beets, crowder peas, corn, butter beans, pears, peaches, and other fruits and vegetables filled shelves of the pantry.  Every jar had gone through the pressure cooker to ensure that the contents were preserved.  We were all involved in the process, pealing, washing and preparing fruits and vegetables for the pressure cooker

The kitchen was pivotal, with its wood-burning stove handily situated near the wall cabinets and the dining table.  The smell of cornbread as it is was poured into the sizzling hot cast iron skillet; then placed into the wood-burning stove for baking.  The sound of the dash, as it was rigorously thrust upward and downward in the churn of clobbered milk until butter floated, completely covering the top of the milk.   The hickory-smoked smell of side-meat sizzling on a flat iron skillet; these experiences are seared in our memories as daily routines.

The three-bed room house was adjacent to a pond, nestled between the levy and the only road out into the larger Teoc community.  Built in 1952, the house was surrounded by hedges that were manicured to form an arc over the entrance onto a brick walkway that lead to the front door of the house. The walkway was adorned with daffodils that bloomed in spring.  Limbs of the mimosa tree spread wide into the yard, bearing pink blooms that created a sweet irresistible fragrance that seeped through open windows of the house on warm spring nights.  Hydrangeas decorated the north side of the house with large pink and blue blooms in spring.  Red rose bushes grew on the south side of the house.  It was from these bushes that we would each selected a red rose to be worn on Mother’s Day, signifying that our mother was alive.  The okra patch was on the left side of the house, and a vegetable garden on the right.  Cabbage, red potatoes, carrots, lettuce, green beans, yellow squash, green peas and green onions were among the vegetables planted each year.  Purple hull peas, crowder pea, popcorn, sugar cane, sorghum, peanuts, and sweet potatoes were in separate patches; and, field peas grew with the corn.  In the watermelon patch, cantaloupe and mush melons grew together.

Plum trees grew sporadically on the levy and along the banks of the creek where we were baptized in the heat of August.  Red berries and black berries were plentiful, and were found near the creek in thickets bordering wooded areas.  Musca dine vines, heaping with the wild fruit encircled trees in the woods.  Bountiful in ponds and streams, fish were readily caught by hook and line from the banks. On warm summer nights, with George West and Charles Jr. Daddy would round up young men at Teoc to invade creeks, ponds and shallow lakes to gig for larger fish.  More often than not they would catch large buffalo, long slimy grinners, thick-scaled gar and sometimes catfish.  We were awakened by bright headlights of the pickup truck approaching the house near 10pm. We would get out of bed, clean the fish and return to bed knowing that we would enjoy a mess of golden fried fish for breakfast before school.

The sounds of morning remain etched in my mind.  Like clockwork, before the roosters crowed at daybreak, the squawky sound of metal springs of her bed broke the silence in the house.  She would position herself to get out of bed.  The wood floors would creak, telling her every movement from her bedroom to the living room.   The scarping sound of the top cover on the wood-burning heater, as she would open it, stoke and add wood to a simmering fire, or start a fire.  Stove wood and chips made a clunking sound as she made a fire in the wood-burning stove to start breakfast.

Mama was always the first out of bed.  By 4:15am, the sound of her voice broke the silence, predictably saying: “It’s time to get up!” If we did not get out of bed immediately, she would call each of us name by name, saying “Uh George West, uh Jr., uh Delbra, uh, Lillie Will, uh “Babysister”, uh, Mary, it’s time to get up!” Hearing our names was a great impetus to get up, otherwise, the consequences were sure.  The pace of her foot steps would rapidly increase as she would walk swiftly toward our rooms, clenching a belt in her hand.  First to our brothers’ bedroom, then to our bedroom, she would hit us across our buttock, saying “It’s time to get up!  You should have gone to bed last night.”

By 4:30 am, warmth from the wood-burning heater and stove penetrated the house, and the house bustled with action.  One would finish breakfast by sifting flour, adding baking powder, buttermilk and lard to make biscuits that would be eaten with molasses, and fried pork sausage or salt meat.  If the hens were laying plentifully, eggs were an added treat.  Sometimes we’d sift corn meal, add baking powder, buttermilk with an egg to make corn bread for breakfast.  Butter was added to hot cornbread that was crumbled into bowls and sprinkled with sugar, before adding buttermilk.  This tasty combination of milk-and-bread was a staple in our home.

Routinely, we would finish the chores, wash up, eat breakfast, get dressed for school, grab our lunches (neatly packed in a recycled brown paper bag), and get on the yellow school bus by 7am. 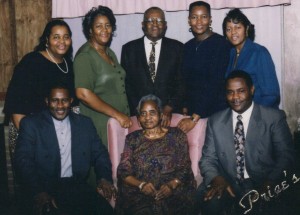 To watch Mama consult the McDonald Almanac before planting or planning a fishing trip; to hear Mama and Daddy talk and make decisions; to watch Mama cut pieces of materials with precision, and make dresses that we were proud to wear; to watch Daddy plow the fields on the red Farmall tractor; and, to hear Mama hum the same spiritual tunes, as she prepared meals; to watch Daddy thumb watermelons, picking the ripest ones to be loaded onto the bed of the pick-up truck, later stored under beds; then, eaten with pleasure on warm summer evenings; the experience of having Daddy (after a full day of work in the field) climb down from the red Farmall tractor and pretend to have a piece of our mud pie…these are but a few of the many things that we will never forget.

The house was a stabled place of certainty.  In that place, Mama and Daddy loved us, nurtured us, guided us, taught us, and gave so much of themselves, in an effort to prepare us for life.  We are forever grateful to Mama and Daddy: Charles and Mary Lee McCain.